THE discovery of large paw prints on a Humevale property has sparked speculation of panthers living in the Whittlesea bush.

The indentations, about 100mm in diameter and resembling big cat prints, were found in the driveway of Colin Hill’s home, invigorating Whittlesea’s own big cat legend.

“There was a set of tracks at the bottom of the driveway that crossed the yard and disappeared down into the valley,” Mr Hill said last week. “They were definitely a cat print and were as big as my fist. Judging by the size, I’d say they had to belong to a 50-80kg animal.”

It was not the first time Mr Hill had come across such tracks.

“Before the bushfires, I found another set of tracks down near a dam on the next property,” he said. Those prints were photographed, but the pictures were destroyed in the Black Saturday bushfires.

Mr Hill said they resembled the prints of a large cat with long claws. “The animal has used its claws to help lift itself out of the mud and the prints were unmistakable,” he said.

Two years ago, he shot and killed a small jet black animal with yellow eyes which he believed at the time to be a feral cat. Now he said it might have been a panther cub.

“At the time I didn’t even think about it, but I’ve never seen a cat with yellow eyes,” he said.

“After seeing the tracks, I wonder if it had been something else.”

Victorian big cat enthusiast John Turner said it was difficult to determine what had made the prints.

“They are interesting but not definitive,” he said, adding that they might have come from a large dog.

Mr Hill was convinced they were not from a dog.

Mr Turner has been attempting to uncover the big cat myth for 25 years and runs the website bigcatsvic.com.au, dedicated to Victorian sightings.

He said there had been a number of big cat sightings in the Whittlesea area in the past five years.

Most sightings described a jet black leopard-sized creature with yellow eyes in or around farmland or on roadsides.

The big cat theory is one that is common throughout Victoria, with about 400 reported sightings in the past five years.

Some believe the creatures are offspring of black panthers brought over by US soldiers during World War II as mascots that escaped into the bush.

Others think they may be an unindentified Australian predatory cat.

Many discount the big cat theory entirely, claiming the creatures could simply be feral cats or black wallabies.

“I have been working in the bush pretty much all of my life, but I have never seen anything like this before,” Mr Bligh said.

“I was standing on the veranda and I watched it for about a minute as it walked across the road and disappeared into the scrub. I was very still, so it either didn’t notice me, or it wasn’t bothered by my presence.”

Mr Bligh described the animal as the size of a large rottweiler, but with a different, stocky build. He said all four shoulders were of the same height, and it glided along the roadside.

“I don’t subscribe to the theories of big cats let loose in the bush, so I am wondering if what we are seeing is actually a naturally occurring animal species we have not come across before,” Mr Bligh said.

“My intelligent thought says to me it is a marsupial of some type, but something bigger than what we commonly see.”

An internet search for big-cat sightings revealed the Yarra Valley has had many sightings over the years. Dating back to 2001 there have been several sightings recorded in Healesville and Warburton, and even one in Montrose.

“In the 50 years that reports have been made about big cats in rural Victoria there has never been any physical evidence to support the sightings,” Mr Temby said.

“If big cats were able to breed and maintain a population there would be some evidence other than these supposed sightings. To date there is nothing that would prove their existence.

“What people mistake for big cats may be as a result of poor light leading to mistaken size, or it may be a mangy fox.”

From the CFZ archives...a yowie tale 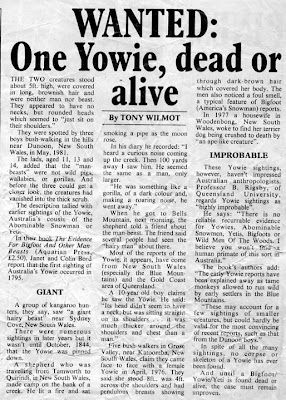 We’d just like to cross-post this important CFZ announcement…

The Weird Weekend 2010 behemoth (held annually in the UK) is lumbering into action, and we are looking for businesses to donate goods or services that we can use as raffle prizes or door prizes.

There are several levels of sponsorship including donations of money to help defray the costs of the event, and donations of goods or services as raffle and door prizes. If you care to sponsor us, in cash or in kind, your logo will appear on our website for the rest of the year. You can also advertise on our website or on our monthly webTV shows, and we will host your advert for 12 months with prices starting at £40 (@$A72). It will get your company name out there to a worldwide - and a healthy local - audience, and you will also have the satisfaction of knowing that you are helping us change the world...just a little bit.

Buy a t-shirt to support the effort here - http://www.zazzle.co.uk/cfzjon

Watch this promo to find out more about what the CFZ does...