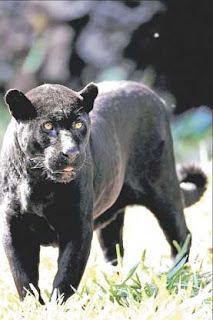 Panther sightings spike
20/08/2008 4:00:00 AM
A LARGE black cat surprised a Glenorie woman last week on her 50-acre property, the latest in a spate of ‘panther’ sightings across the north-west of Sydney.
Cheryl Gilbert, who runs her essential oils business Balanced Essentials from her bush acreage, saw the animal, which she described as “bigger than a labrador”, while jogging on her property.
“It was black-brown and looked dappled in the light, with a slight leopard look, a reasonably sized tail…it sort of curved up a bit,” she told The Gazette last week.
Ms Gilbert was too frightened to continue her jog and called her husband to come and get her so she would not risk running into the cat again. “This is really serious. It should be dealt with, and quickly. When you can’t even walk on your own property because you’re terrified…it’s not good at all,” she said.
“We’ve contacted a lot of people...police, zoos...it concerns me that we’ve had no help whatsoever. We used to have a lot of wallabies and now we have none.”
A similar cat-like animal has also been sighted throughout the Hawkesbury and as far afield as Berowra, Kenthurst, Maraylya and Middle Dural in the past eight years.
Readers can report all big cat sightings to Chris Coffey by calling 4572 1291 for inclusion in a confidential database.
Posted by RR at 15:25