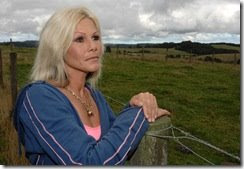 Otways panther terrifies woman
Apr 16th, 2008
A Colac district woman is afraid to return home after staring into the eyes of a large black cat.
Barongarook’s Connie Whistance said she now believed stories about an Otway panther after seeing a black cat “the size of a small cow” metres from her car.
Ms Whistance was nearing her Alford Road home late Monday night when she and friend Phillip Little of Beech Forest saw a pair of large glowing eyes in front of them.
The black cat sighting was the second in two days after a Mornington Peninsula tourist reported seeing a similar animal near Beech Forest on Sunday afternoon.
Ms Whistance said yesterday she was still panicked by her encounter and was unsure when she would return home.
She said the couple sat staring at the animal in shock for about three minutes and were amazed by its size and “massive eyes”.
“They were piercing fluorescent, greeny-yellow eyes. They were evil eyes, they were very, very scary,” Ms Whistance said.
“When I drove a bit closer it bent down and I could see its shoulder blades and they were as big as my cat, but then it vanished into the dark,” she said.
“It was as black as black and it was big.”
Ms Whistance, who moved to Barongarook from Geelong eight weeks ago, reported the sighting to Colac police.
Ms Whistance, who despite her fear of the panther, does not want authorities to harm the animal, said she had noticed unusual tracks around her home and would not leave her pets outside.
George Devik, who lives east of Melbourne on the Mornington Peninsula, said he spotted a big black animal while driving along Binns Track near Beech Forest.
“The head I didn’t see but the body I did and it looked like a big cat,” he said.
“It was as black as black and it had a big black bushy tail.”
Mr Devik said he had visited the Otways since he was young and had doubted the existence of an Otways panther.
“To be honest up until Sunday afternoon I was very sceptical of the black cat conspiracy, until I saw what I saw,” he said.
“Now I truly believe there is a black type of cat and it was very large.”
Big cat researcher Simon Townsend said the latest sightings were the first reported in the Otways for a couple of years, but he suspects more people have seen a panther.
Mr Townsend said descriptions of the black cat were consistent with other reported black cats from the Otways, but the two sightings were probably a coincidence and not the same animal.
“There is clearly a population of them, not just one animal,” he said.
Mr Townsend said people should be careful if they spotted a panther because researchers were uncertain about their behaviour patterns.
Posted by RR at 17:45