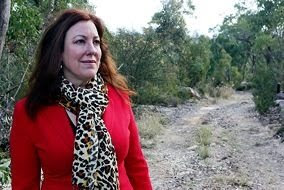 Cat walks again
19/08/2008 12:00:00 AM
WHEN Cheryl Gilbert went jogging on Tuesday, she got more than a run for her money.
A confrontation with a cat with a leopard-like head on her Glenorie property, which backs onto the Maroota State Forest, had her phoning her husband for help rather than turning her back on the animal. Big-cat sightings in Sydney's north-west hit the 350 mark last week when Mrs Gilbert came face to face with one of the fearsome predators while she was jogging around the back of the property before lunch.
``I came around the corner and there it was in a clearing only about 20 feet [six metres] away much, much bigger than a cat,'' she said. ``It was a blackish colour, with dappled markings I think they're called rosettes.
``It looked at me, then turned around and went into the bush. It had a thick, fairly long tail, a little less than a metre long. It had a leopard-like head with small ears. It made no noise at all.''
Mrs Gilbert was more surprised than frightened and said it was not until later that she ``basically panicked''.
She rang her husband Mark on her mobile to ask him to pick her up. After finding a large paw print in their shed and other recent sightings in the neighbourhood, the Gilberts are convinced there are large cats in the area. ``We used to have a lot of wallabies on our lower paddock and they're not there any more,'' Mrs Gilbert said.
Chris Coffey of Kurrajong, who has 350 confirmed sightings on her Hawkesbury big cat database, said Mrs Gilbert's sighting was unusual.
``This is the first sighting we've had where the rosettes have been obvious, which means it had to be too close for comfort,'' Ms Coffey said. ``There's no doubt that we have a breeding population out there and it's only a matter of time before something tragic happens.''
Posted by RR at 15:14