Big cat sightings all over Australia 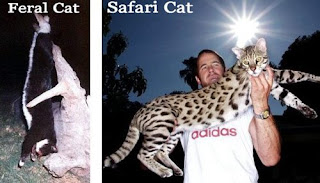 Big cat sightings all over Australia
Posted on August 7, 2008, 10.10pm
It’s not just Mount Gambier and surrounding areas that big cats have been sighted. These sightings have been going on for decades, all over Australia. The Grampians Puma being one of the most popular.
During World War 2, American servicemen brought American Mountain Lions cubs into the Mount Gambier area to be used as mascots.
At the end of the war, Australian authorities advised the soldiers to release the animals in the Grampians.
After the release, the soldiers continued to leave food out for the animals and within a short time the animals failed to return for the food.
At this time it was assumed that the animals had not survived in the wild. This explanation in not convincing because sightings of these cats were recorded prior to World War 2.
The earliest Victorian big cat reports date back to the mid 1880’s around the outskirts of Melbourne. However in recent years, the central west of the state, around Hamilton, Ararat, Maryborough, St Arnaud and the wild and rugged Grampians, have become the centre of activity.
It’s not that hard to beleive there are big cats out there. Just look at the feral cat in the photo on the left, shot in Queensland and standing at 50cm (to the height of its back).
Living in the wild and feeding on carcases, farmers’ chickens and whatever else they can get their claws into, it’s wonder they grow to large sizes.
And what about The Safari Cat on the right? A cross between an ocelot and a domestic cat, proving that wild cats and domestic cats do in fact interbreed.
Therefore, if there were wild cats released into the wild. That could quite possibly be the result of what people are witnessing now. Simply a cross of wild and domestic cats.
Posted by RR at 11:21