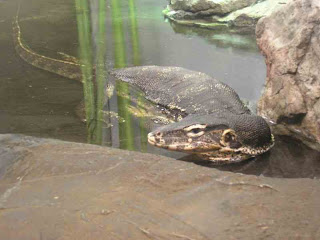 The mother of an Australian man who was lost for eleven days in a jungle in Laos says her son has described being chased by giant lizards.
Hayden Adcock went missing in the jungle for eleven days after he went on a trek to visit a waterfall.
He was rescued by local villagers last week and remains in a critical condition in a Bangkok hospital.
His mother Lynne Sturrock says her son has horrific wounds and says he was attacked by wild animals.
She says he had to climb over a cliff to escape from the lizards.
"He'd said he had never seen anything like them before," she said.
"I think they could be related to Komodo Dragons only not as big, but you know quite large because he has seen goannas in Australia, but these were horrible and larger and all of a sudden this group of lizards started chasing him."
Posted by mike at 15:48