Some CFZers have just returned from Tasmania, and the pickings are slim in that part of the world as far as exhibits of the legendary Tasmanian Tiger go.
The Tasmanian Museum and Art gallery narrowly beats the Cascade Brewery's display (they have a fake model in a glass box behind the bar) with its frankly pathetic exhibition of all things Thylacine. There were more tiger-related objects in the gift shop than there were in the natural history portion of the museum. Very disappointing.
You'd think, being such a drawcard, the Tiger might get a bit more prominence.
Here's what ~was~ on offer (not the 'real deal', but crappy reproductions, which we can understand...but the pup in the jar isn't even realistic when seen firsthand): 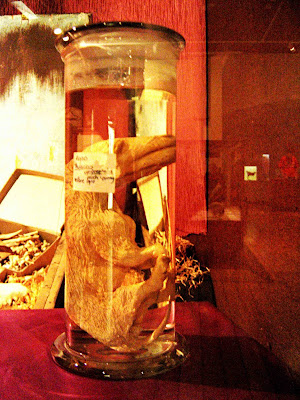