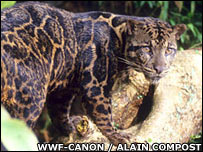 Clouded leopards found on Sumatra and Borneo represent a new species, research by genetic scientists and the conservation group WWF indicates.
Until now it had been thought they belonged to the species that is found on mainland southeast Asia. Scientists now believe the two species diverged more than one million years ago, and have evolved separately since.
With bodies up to 1.1m long, clouded leopards are the biggest predators on Borneo and one of Asia's largest cats.
It's incredible that no-one has ever noticed these differences
Andrew KitchenerThe separation of the species was discovered by scientists at the US National Cancer Institute near Washington DC.
"Genetic research results clearly indicate that the clouded leopards of Borneo should be considered a separate species," said Dr Stephen O'Brien, head of the Institute's Laboratory of Genomic Diversity.
"DNA tests highlighted around 40 differences between the two species."
Supporting evidence came from examination of fur patterns. Leopards from Borneo and Sumatra have small "clouds" with many distinct spots within them, grey and dark fur, and twin stripes along their backs.
Their mainland cousins have large cloud markings on their skin with fewer, often faint, spots within the cloud markings, and are lighter and more tawny in colour.
"The moment we started comparing the skins of the mainland clouded leopard and the leopard found on Borneo, it was clear we were comparing two different species," said Dr Andrew Kitchener from the National Museums of Scotland.
"It's incredible that no-one has ever noticed these differences."
WWF, which maintains a large conservation operation on Borneo, estimates there are between 5,000 and 11,000 clouded leopards on the island, with a further 3,000 to 7,000 on Sumatra.
"The fact that Borneo's top predator is now considered a separate species further emphasises the importance of conserving the 'Heart of Borneo'," said WWF's Stuart Chapman, co-ordinator of a project seeking to preserve the island's wildlife.
The three governments with territory on the island - Indonesia, Malaysia and Brunei - signed an agreement earlier this year pledging to protect the "Heart of Borneo", 200,000 square kilometres of rainforest in the middle of the island thought to be particularly high in biodiversity.